The players' most private space has undergone some notable changes over the course of history.
“There are some men here who instead of coming to play football want to be part of the party. Know that you are not only representing Real Madrid, but all of Spain and all those Spaniards who work abroad and who are filled with pride when a Spanish side triumphs” (Santiago Bernabéu, 1956).

These words from the Real Madrid president in the Prater Stadium dressing room in Vienna were what got a reaction out of the Whites and helped them send out Rapid Wien in the first round of the European Cup. That year the team would go on to win the club's second title in the competition. That intervention is a clear indication of just how important the things that go on within a dressing room can be. Technical talks, motivational messages, the hairdryer treatment... Success is mapped out inside these four walls. This is a place that has undergone a lot of changes over the club's 112-year history.

The first dressing rooms Real Madrid players used to change into their kits were in the toilets of the ‘La Taurina’ bar (in the old bull-fighting ring) as well as in an old storehouse for building materials. Beginning in 1910 they moved to the O’Donnell pitch, where a top quality dressing room for the time was built, which they also shared with the athletes who trained there. From 1923 to 1924 they used another hut in the Velódromo with three rooms for the teams and the referees, with separate dressing room facilities, showers and sinks.

As time went on and construction techniques improved, the interior of these spaces started to evolve. To begin with, the Real Madrid players only had one physio's bench. They also had metal coat hangers and benches which were later replaced for wooden ones in the 1980s. The lockers came years later. Nowadays, each player's name and picture is on display, and is also illuminated. On top of that, there is a Jacuzzi, a cold-water pool, hydromassage cabins and exercise bikes.

Thanks to the Bernabéu Tour, fans can see this otherwise private area where their heroes get ready and where the team's victories are mapped out. They can also visit the “Best Club in History” room, the trophy cabinet, the pitch, the presidential box, the player's tunnel, the dugouts, the technical area and the press room, among other places. Madridista Card Holders can purchase their ticket for a special price and members get in for free. 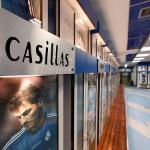