Cristiano Ronaldo scored the goal for the Whites, who had chances to draw and even win in one of the toughest stadiums in La Liga.
Mestalla

1
Real Madrid slipped up in Valencia, although they had chances to draw level and even win a pulsating match with opportunities for both sides. In fact, it was the Whites who took the initial lead, a goal that came straight from Ancelotti's training ground. Kroos swung in a free kick in the 13’, Bale flicked it on with his head and Negredo blocked the ball with his arm in the box. Cristiano Ronaldo sent Alves the wrong way with his penalty to tilt the game in his team's favour.

The Portuguese man added to his statistics and is now the Whites' all-time top goalscorer away from home in La Liga. He could have even doubled his tally before the half-hour mark. An exceptional pass between the lines from Kroos, a great outside-of-the-boot cross from Bale in the 25’ and an even better deft touch by the Portuguese star to get past Alves came to nothing when his resulting shot, with almost no angle to play with, found the outside netting.

The last minute of the first half was a frenetic affair. Real Madrid could have got their second just as the home side could have equalised. Benzema tried his luck first, but his effort, after Otamendi slipped on the edge of the box to leave him with a free path to goal, went straight into Alves' arms. Luck was with the Whites during the next bit of play. André Gomes shot, the ball hit Carvajal's chest and then came off the post. That is how things finished at the break.

The good fortune that contributed to the last chance of the opening half coming off the post deserted the Whites at the beginning of the second half. Barragán shot from outside the box in the 52’ and the ball unfortunately hit Pepe in such a way as to catch Casillas off guard. Things were all square once again, although it would have been short lived had Bale been more accurate with his one-on-one with Alves six minutes later.

While level scoreline made the Madrid outfit's task tougher, things got even more difficult in the 65’. Parejo took a corner and Otamendi scored with a header. There were still 25 minutes left on the clock and if there is one thing Real Madrid do not lack it is their refusal to give up until the referee blows the final whistle. And that is what happened yet again. Ramos, with a header that went centimetres wide of the mark in the 79’, and Isco, with another effort that got the best out of Alves six minutes later, could have earned Madrid point. Now the focus will have to be on Wednesday's Copa del Rey game in the Calderón. 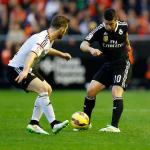