The Whites will make their debut in the tournament on Tuesday 16 December in Rabat (8:30pm CET) against the winners of this clash.
Real Madrid now know who their possible opponents will be ahead of the 2014 Club World Cup semi-finals. The Whites will play against the winner of the clash between Mexico's Cruz Azul and the Asian champions, who will be decided when Australia's Western Sydney Wanderers meet Saudi Arabia's Al-Hilal. The Club World Cup schedule is as follows:

Emilio Butragueño, the director of Institutional Relations, and Fernando Hierro, the first team assistant coach, represented the club during the draw, which was held in Marrakech. As the European champions, Real Madrid will start the competition in the semi-final stage, as will San Lorenzo (the Copa Libertadores champions).

Cruz Azul
The Mexican side will be representing CONCACAF, and also hold a record six titles in their equivalent of the Champions League. Their squad includes a number of players with experience of Spanish football such as Pavone, Bernardello, Perea, Aníbal and Torrado.

Asia
The champions have yet to be decided with the final, which will be played on 1 November, seeing Western Sydney Wanderers (Australia) take on Al-Hilal (Saudi Arabia). The Arabians could collect their third crown as continental champions, while it will be the first time the Australians have ever fought for the title.

Participants
The Club World Cup is played between the current holder of the host nation's domestic League, in this case Morocco, and the champions of FIFA's six confederations: UEFA (Europe), CONMEBOL (South America), AFC (Asia), CAF (Africa), CONCACAF (North America, Central America and the Caribbean) and OFC (Oceania). This will be the eleventh edition of the tournament.

Real Madrid will travel to the African country looking to lift the trophy for the first time in the competition's current incarnation. The Whites have already won the Intercontinental Cup on three occasions: 1960, 1998 and 2002. 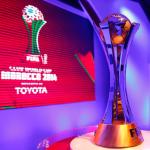