Enjoy the French defender's best moments with the Whites here.
He joined Real Madrid in the summer of 2011, just 18-years-old, and now at the beginning of his fourth season with the team, he has already accumulated five titles: 1 Champions League, 1 European Super Cup, 1 La Liga, 1 Copa del Rey and 1 Spanish Super Cup. Now, at 21 years of age, Raphaël Varane has extended his commitment with the club until 2020.

He made his Real Madrid official debut on 21 September 2011 in a La Liga fixture against Racing de Santander in El Sardinero (0-0). Since then, Varane has played 74 games with the Whites, during which time he has scored 4 goals. In his first season he played 15 games and scored twice. In the 2012-13 season he made 33 appearances and once again got on the scoresheet on two occasions. Despite being injured during the 2013-14 season, he played 23 times, and has played three matches during the current campaign.

Strong in the air, fast and comfortable when taking the ball out of the defence, he has already shown his undeniable qualities with Real Madrid, as was the case during the 2012-13 Copa del Rey semi-final clash with Barcelona. As well as putting in a great defensive display during that knock-out tie, he scored in both legs and was central to the team progressing to the final.

Thanks to his young age and the experience he already has under his belt with Real Madrid and the French national side, with whom he featured in the World Cup in Brazil, Varane has one of the most promising futures ahead of any player in Europe, now that he will be part of the Real Madrid set up until 2020. 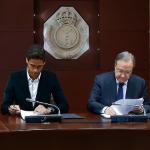