Representatives of politics, culture and sport appeared at the public viewing in the Santiago Bernabéu.
Numerous people and representatives of institutions have visited the Santiago Bernabéu to bid farewell to Alfredo Di Stéfano. Football clubs such as Benfica, Espanyol, Real Valladolid, Sevilla, Levante, Deportivo, Valencia, Sevilla, Betis, Almería, Atlético de Madrid and Barcelona were present to pay tribute to the man who changed the history of football.

Gianni Infantino, General Secretary of UEFA: “All of us who love football should be thankful for what he did for this sport". Josep María Bartomeu, president of Barcelona: "He is a universal figure. We have lost a Real Madrid great and one of the greatest. He had a different way of playing. A lot of things that happen today we have inherited from Don Alfredo". Enrique Cerezo, president of Atlético: "He was the number one. There has not been and there will never be a player who could do everything he could on the pitch".

Luis Filipe Vieira, president of Benfica: "He was well-loved here. Eusebio remembered him and said he was the best in history". Francisco Javier Catalán, president of Levante: “World football must pay tribute to Don Alfredo and be very grateful for his contribution”. Lendoiro: "He is one of those unique people in life who you never forget".

Amadeo Salvo, president of Valencia: “He is one of the greats and he will be remembered around the world forever”. José Castro, president of Sevilla: “He left his mark on the teams he played with, but also on his opponents”. Iríbar: “I had to be here today. It was very nice to listen to him. The most complete footballer I have ever seen”.

Politicians
José Ignacio Wert, ministry of Education, Culture and Sport: "He changed the world of football and sport in general". Ignacio González, president of the Comunidad de Madrid: "He was unarguably the greatest. He was one of the greatest ambassadors Madrid has had”. Esperanza Aguirre, of the PP in Madrid: “He was the best in the history of football, number one”.

Ana Botella, the mayor of Madrid: "He made Real Madrid great and took the name of Spain’s capital around the world. The municipal corporation is going to propose a public space or a street in his honour". José Manuel García-Margallo, minister of External Affairs: "He was one of the best ambassadors of Marca España. He played a large part in our childhoods"; Cristina Cifuentes, member of the Government in Madrid; Jaime Lissavetzky, municipal spokesperson for PSOE in Madrid; and Álvarez del Manzano, ex-mayor of Madrid.

Carlos Bettini, Argentina’s ambassador to Spain: "He was number one as a person and a footballer". José Mercé: “I remember him from when I was very little. I was lucky enough to see him in the box, I sat with him and enjoyed listening to him. He is one of the most complete players in history”.

A book of signatures contains dedications to Alfredo Di Stéfano. In addition, the president’s box was filled with flowers from Madrid Supporters Clubs, the CSD, Madrid Council, the Federación Española and the Argentinian Embassy, and from various football clubs. 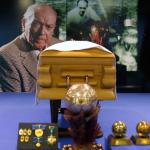