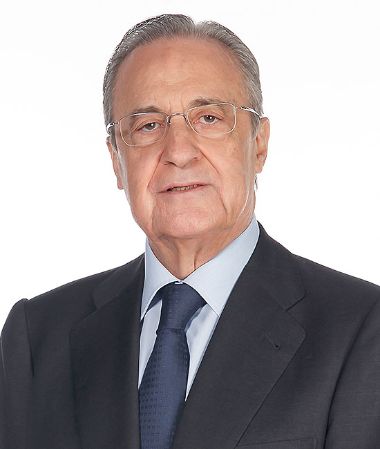 Florentino Pérez has restored Real Madrid's international prestige. During his two periods in charge of the club he has won 52 titles across the two disciplines, including four European Cups in football and two in basketball. He has put the institution's finances in good shape, transforming it into the richest club in the world. He has also carried out a complete overhaul of all aspects of the organisation which has led to Real Madrid becoming the “most valuable sports club in the world”, in the words of Forbes magazine.

An engineer and businessman, Florentino Pérez took up the presidency in July 2000 after beating Lorenzo Sanz, who was head of the club at the time. Under his management, star signings such as Figo, Zidane, Beckham and Ronaldo arrived. The quality of his football and basketball sides led to eight trophies.

His first period in charge was also notable for the stadium improvements carried out under the 'Santiago Bernabéu Master Plan'. The arena was recognised by UEFA as an 'Elite Stadium' and hosted the final of the Champions League in 2010. In 2006, Ciudad Real Madrid - a training complex ten times bigger than Madrid's previous facilities - was opened at Valdebebas.

He was re-elected with a majority in 2004, before resigning voluntarily two years later. In 2009, he returned to begin a second spell at the club which is defined in sporting terms by signings including Cristiano Ronaldo, Karim Benzema, Gareth Bale, James Rodríguez and Toni Kroos. Amongst the silverware lifted during his tenure are five European Cups (2014, 2016, 2017, 2018 and 2022) and Club World Cup crowns apiece. In addition to these trophy triumphs, the football team has also clinched four league titles, a trio of UEFA Super Cups, 2 Copas del Rey and 4 Spanish Super Cups. The basketball roster has also tasted both domestic and international glory, with a pair of European Cups, an Intercontinental Cup, six league crowns, six Copas del Rey and seven Spanish Super Cups.

Florentino Pérez has spent over a decade at the helm of the club and has continued its process of modernisation with the construction of the first-team and academy residences located within Ciudad Real Madrid.