The forward has won seven titles with Real Madrid.
Mariano is celebrating his 28th birthday. The forward was born on the 1st of August 1993 in Barcelona and has made 62 appearances in a Whites' jersey, scoring 11 goals. His Real Madrid trophy haul is made up of seven titles: 1 Champions League, 2 Club World Cups, 1 European Super Cup, 2 LaLiga titles and 1 Spanish Super Cup.

Mariano's first-team debut came on the 27th of August 2016 against Celta at the Bernabéu and he netted his first goal in the first leg of a Copa del Rey tie with Cultural Leonesa. Previously, he came through the Real Madrid academy ranks, having joined in 2011 to play for the Under-19s. In the 2015/16 he made his breakthrough while playing as a striker for Castilla, scoring 27 times. In the summer of 2018 he returned to the club after playing at Olympique Lyon for one season. 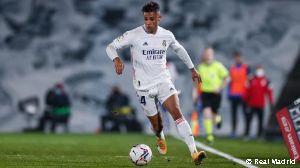