"The award is for the whole squad because we've all worked together this season", explained the forward.
Kosovare Asllani won the Mahou Five Star Player of the Season 2020/21 award for Real Madrid. The Swedish forward has played 29 games and ended the campaign as Real Madrid's top scorer with 16 goals.

The player showed her gratitude for this accolade, which is chosen by the fans through social media: "I think we've had a very good season, given that it's Real Madrid's first year. The most important thing is that we have secured a place in next season's Champions League and we're very happy with that".

Teamwork
"I'm obviously very happy. I think I've helped the team, but this award is for the whole squad because we've all worked together this season". 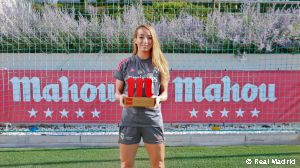