Rueda and David, with a stunning goal, secured the victory for the madridistas, who will take on Deportivo for a place in the final.

2
The under-19s are in the semi-finals of the Champions Cup. The Real Madrid youngsters won away against Atlético de Madrid (1-2) with a 4-2 aggregate scoreline. Rueda and David, who scored a magnificent goal in the top corner, got the goals for the Whites' youth team at the Ciudad Deportiva Wanda in Majadahonda. Our team take on Deportivo in Marbella on Thursday with a place in Sunday's final at stake.

It was an evenly matched encounter in the opening stages, as both teams had chances to score. Peter came close for the under-19s in the 12th minute, picking up a loose ball, cutting inside his opponent and striking with his left foot, without reward. The deadlock was broken five minutes later as Rueda headed home from a corner to make it 0-1. The Whites could have doubled their lead with two good chances in 31' and 34'. First, Theo's shot was cleared off the line before an Aranda shot was kept out by Iturbe. The last chance of the first half fell to the Red and Whites, Soriano hit the ball goalwards but Lucas Cañizares cleared it off the line.

Great goal decides the game
After the break, the home side came out strongly and Soriano equalised from the penalty spot (53') and Atlético went in search of a second. The best chance came in the 65th minute when Moreno found himself one-on-one with Lucas Cañizares. The madridistas also sought the goal to kill off the game and it came in the 80th minute. David scored a wonderful goal, dispatching a long-range shot into the top corner of the net to settle the tie. 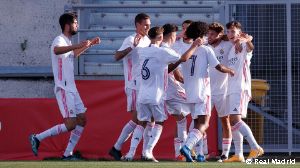 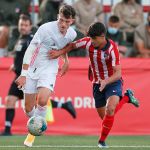