On the 6th of June 1954, Real Madrid beat Joventut in the final (56-41).
Today marks 67 years since Real Madrid's basketball team clinched their third Copa de España. On the 6th of June 1954, our team got their hands on the trophy when they beat Joventut in the final (56-41). The madridistas had first tasted cup glory three seasons prior, and dominated the 1950s, making it to eight successive Copa finals and winning five.

Following an evenly-matched first half. Real Madrid stepped up a gear after the break to win the final at Frontón Fiesta Alegre in Madrid by 15 points. Galíndez was the team's standout man, while Freddy Borrás was coach. 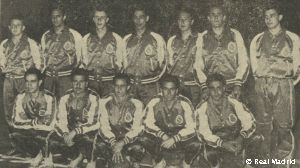