The American shooting guard has played more games than any other foreign player in our jersey.
Jaycee Carroll made his 700th appearance for Real Madrid in the match against Valencia Basket. The shooting guard hit this milestone, which has only been reached by his teammates Reyes and Llull in the history of the basketball team, in his tenth season with Pablo Laso and is, by a long way, the foreign player who has played the most times in the white jersey, ahead of Taylor (394) and Bullock (364).

20 titles in 10 seasons
The American has been with Real Madrid for a decade and has been one of the cornerstones of the team's successes. He has an impressive 20 titles to his name: 2 Euroleagues, 1 Intercontinental Cup, 5 Leagues, 6 Copa del Rey and 6 Super Cups. His 700 games have come in 380 league games, 274 Euroleague games, 28 Copa del Rey games, 16 Supercopa games and 2 Intercontinental Cup games. 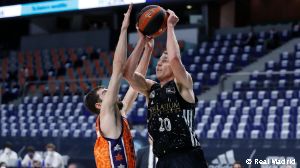