The team travel to Stamford Bridge for the Champions League semi-final second-leg clash (9pm CET).
A night of Champions League action lies ahead as Real Madrid face one of the biggest games of the season at Stamford Bridge, where Chelsea are the opponents in the semi-final second-leg clash in the continent's elite club competition (9pm CET). The 1-1 first-leg result leaves everything to play for, but our team is fully focused on progressing to the final.

To book a spot in the Istanbul showpiece, the Whites simply have to score and that's something that Karim Benzema (the side's leading scorer with 28 goals), Casemiro (seven), Marco Asensio and Vini Jr. (six) all have a habit of doing. Indeed, the Brazilian midfielder recently made this his most prolific LaLiga campaign. However, if the team is to advance to the final, it'll also be important to maintain the defensive solidity that has seen the side record 20 clean sheets this term.

“We’ve got this far thanks to our hard work and believing in what we do”, commented Zinedine Zidane in the online pre-match press conference where he was joined by Toni Kroos, who said that, “We’re in with a chance of making the final and we’ll give our all”. Captain Sergio Ramos returns to the madridista squad for the trip to London, whilst Ferland Mendy and Fede Valverde also return to the fold.

Tough opponents
Chelsea are proving to be firm candidates for the continental crown and tough opponents for Madrid. Thomas Tuchel’s men boast the competition’s joint-meanest backline alongside fellow semi-finalists, Manchester City, with both teams having been breached just four times.. Olivier Giroud (six) and Timo Werner (three) are the hosts’ leading scorers in the Champions League, whilst the Blues beat Fulham last weekend in the Premier League. Should the madridistas progress, Manchester City will be opponents in the Istanbul showpiece. 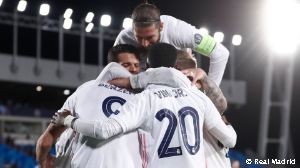