The academy graduate reached the milestone in the win over Monbus Obradoiro.
Usman Garuba made his 100th Real Madrid appearance in the rearranged league Round 20 road trip to Monbus Obradoiro. The madridista power forward, who played his part in the win with 12 points, eight bounds, three turnovers and a PIR of 20 in his 24:33 minutes on court, is now into his second season as a member of the first-team roster at the age of just 19.

Garuba is one of the youngest academy graduates to have debuted for the first team. He made his bow on 28 October 2018 at the age of 16. Since then, he has played an increasingly prominent role within Pablo Laso's team and has smashed several club and ACB records. He's the youngest madridista to have started a match, having done so aged 17 years and six months. It was also at this age that he claimed his first double-double (13 points and 10 rebounds against UCAM Murcia), which also saw him land the all-time league record. He is also the player who needed the fewest number of games to post double digitis in the PIR stakes after doing just that in his second match for the Whites, whilst he is the youngest player to have made three blocks in the ACB (16 years old).

One of Europe's best starlets
Garuba currently sits second in the EuroLeague's Rising Star standings on 132 points from 30 games and lies second to Lithuania's Zalgiris Jokubaitis. Garuba's trophy haul with the first team features a Copa del Rey and two Super Cups, whilst during his time in the Whites' academy, he won a EuroLeague and two Spanish league titles. He also landed a gold medal at the Under-18 European Championship with Spain. He has contested 52 league games, 44 EuroLeague matches and two Copa del Rey and Super Cup games apiece. 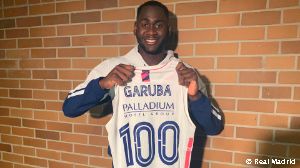