Real Madrid beat Coosur Betis and continued their impressive run in the league. Seven players reached double PIR figures, fronted by Laprovittola (21).
WiZink Center
95
77
Real Madrid are still firmly on top of the league after beating Coosur Real Betis on matchday 27 to make it 24 wins in 25 games. 10 consecutive wins make this the second best start to a league campaign after 2014 (15). Strong defence in the first and third quarters, and a run of three-pointer (15), were enough to take control of a game that was broken after the interval with a 24-13 run and Laprovittola (16 points, with four three-pointers, and 21 PIR). Thompkins (18), Tristan (16), Deck (13), Causeur (14) and Tavares (12) also hit double figures. The Whites' youth-team player put in his best performance as a Real Madrid player.

The leader's started strongly in defence, allowing only 14 points to Coosur Real Betis in the first quarter, and the three-pointers scored (4), were the keys to taking the initiative from the opening. Real Madrid were in clear command against an Andalusian side that put up a fight, winning the game on the rebound. Garuba, with 5 points, and Tavares, with 4 rebounds, were outstanding for The Whites (18-14, min.10).

The game picked up the pace offensively in the second quarter
Laso's rotations boosted the team's output, raising their attacking play with the trio of Thompkins (8 points and 3 assists), Causeur (7) and Carroll (6). The youth product Tristan joined in with a 3+1 to open up a first significant gap of 13 points at 44-31 in the 18th minute. But Coosur Real Betis, who had relied on the work of Ndoye on the offensive rebound (4), found fresh air with the introduction of Randle. His two three-pointers in the final stretch of the first half saw the visitors follow in Madrid's path in the second 10 minutes, ending with a 28-24 lead for the league leaders (46-38, min.20).

Real Madrid suffered an offensive blip at the beginning of the third quarter. A five minute spell allowed the visitors to get to within 5 points (50-45, min.25). But the deficit did not increase because Madrid kept up their intensity in defence, with Tavares strong on the paint (3 blocks), while on the counter-attack they found the points they needed to keep their opponents at bay. The game took a turn for the better in the 27th minute for Real Madrid. Laprovittola unleashed his talent and in three minutes he put the team in control with an exhibition of three-pointers. Three in a row in 60 seconds, including a 3+1 for a total of 12 points between 27' and 30', gave the leaders a 19-point lead (70-51) and set up a great third quarter (24-13).

Real Madrid's control seals the victory
Laso's men were not going to give the Andalusians any chance of getting back into the game. Laprovittola had triggered the leader's best side. Everyone contributed to establish a difference of around twenty points. Tristan, who had his best game for Real Madrid, scoring from all positions (2/2 in two-point shots, 2/3 in three-pointers) for a total of 11 points, 4 rebounds, 2 blocks and 16 PIR in 14 minutes of play. The Whites were without Alocén for precautionary measures (95-77, min. 40). The team is now focusing on next week with three games away from the WiZink Center, starting on Tuesday at Obradoiro in the rescheduled matchday 20 fixture (6pm CET). 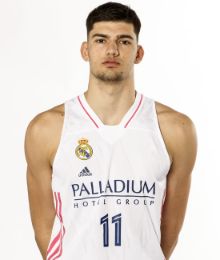 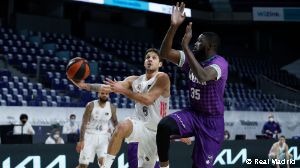 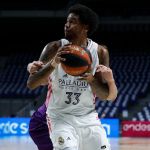