Tavares had a magnificent February with Real Madrid and was instrumental in winning all three league games. The first one was against UCAM Murcia, where he recorded a double-double (16 points and 15 rebounds). In the derby against Estudiantes, the Cape Verdean grabbed 10 rebounds and finished the game with 17 PIR. The centre ended February in style against Hereda San Pablo Burgos (27 points and 37 PIR). He also became Real Madrid's second highest blocker in the ACB. 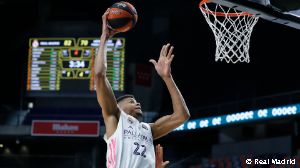