The hosts ran out winners in Round 25 of the EuroLeague.
Pabellón Fuente de San Luis

78
Real Madrid was unable to record its sixteenth victory in the EuroLeague, as the visitors slipped to defeat away to Valencia Basket at La Fonteta. The Whites were back in EuroLeague action after competing in the Copa del Rey and were on the receiving end of a strong start by the hosts. Pablo Laso’s side improved in the second half, but it was not enough to come away with maximum points in Round 25 of the European competition. Walter Tavares (19 PIR) and Jaycee Carroll (20 points) were the madridistas’ standout performers.

Valencia Basket set the pace in a first quarter and showed its class from three-point range, with Williams, Kalinic and Marinkovic producing fine percentages. Madrid fought to reduce the deficit through Carroll (15 points and 3 out of 5 three-pointers) and Tavares (6 points) to make the score 29-21 after the first ten minutes.The hosts kept up the intensity and continued recording three-point plays from the perimeter to extend the lead to 44-30 in the 15th minute. Laso's charges struggled to produce their best defensive performance and, to make matters worse, Sergio Llull had to withdraw with discomfort, with the sides going into half-time at 55-35.

Madrid fought until the end
The visitors, spearheaded by Gabriel Deck and Nicolas Laprovittola, came out more focused after the break and went on a 2-8 run. Just as it seemed Real Madrid was edging closer to the hosts’ scoreline, eight points from Van Rossom enabled Valencia Basket to hold off the team’s momentum. The third quarter was very evenly matched and the Whites (16-17) just edged it with Deck excelling in attack (7 points).

Laso's side gave it their all until the end and narrowed the gap through Thompkins, Alocén, Causeur and Abalde (12 points in five minutes). But the home side controlled the lead brilliantly and went on to win the game. Despite an 18-26 score in Madrid’s favour in the final quarter, the game ended in an 89-78 defeat. The Whites must now turn their attention to their next game at home against Zalguiris on Thursday (9:00 pm CET). 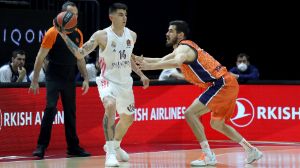