Goals from Latasa and Hugo Duro earned the reserve team all three points in their visit to Navalcarnero.
Mariano González Stadium

2
Real Madrid Castilla won 2-1 away at Navalcarnero in the matchweek 14 league game. The Whites had to come from a goal behind to take all three points. Goals from Latasa and Hugo Duro, the winner from a stoppage-time penalty, were enough to turn the game around and come out on top against a side who were unbeaten at home. After beating Las Rozas on Wednesday, the Whites end the week with a clean sweep of victories.

The first chance came for Castilla, with Gila's header going narrowly wide. Navalcarnero took the lead, however, thanks to a Gonzalo goal in the 17th minute. Eight minutes later, the home side were reduced to ten men after Alonso was sent off for a second yellow card. The reserves went in search of an equaliser through Hugo Duro and Santos down the right. Before the break, Aitor saved the 1-1 after a shot from Dotor.

Duro hits eighth of season
Gonzalo was shown a second yellow on 51’ as the hosts were reduced to nine men. Shortly afterwards, Peter appealed for a penalty for a pull in the area. Castilla were pouring forward in attack at this stage. After several chances went begging, an equaliser duly materialised. Santos played in an inviting cross that Latasa met with his shoulder to restore parity with 71 minutes played. However, Raúl’s charges weren’t going to settle for a point and went in search of the winner in added time. Duro was upended in the box and the leading scorer in the sub-group dusted himself down and put the spot-kick away to hand Castilla a second win of the week. 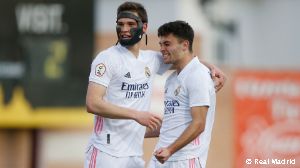 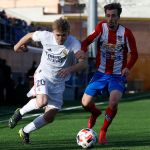