Real Madrid fight back after the hosts had taken the lead to pick up three points on matchday 22 of LaLiga.
El Alcoraz

2
Real Madrid clinched their seventh away win of the season at El Alcoraz stadium on matchday 22 of LaLiga. The visitors took control of the encounter early on, but Huesca went ahead moments after the re-start after a fine strike by Galán. Zidane’s side had to dig deep to turn the match around and they managed to do so thanks to a brace from Raphaël Varane. Huesca pressed in the first half and created chances, the first falling to Okazaki who steered the ball wide after a cut-back from the right and then Rafa Mir fired into the side-netting for the hosts.

After dominating possession for long spells, Madrid’s first opening came in the 10th minute when Vini Jr., Marco Asensio and Karim Benzema combined on the edge of the area but the danger was cleared. Soon after, the Brazilian burst down the left wing and his cross to the back post was hit on the volley by Asensio, but the defence was equal to it and the effort went wide for a corner. Nacho then headed the resulting corner fractionally over. As the rain began to fall heavily, the visitors began to turn the screw and piled on the pressure in attack. On 24’, Vini Jr flicked the ball over the onrushing goalkeeper but the ball went agonisingly wide. Moments later, Benzema curled a low effort from the edge of the box, which was pushed away by Álvaro.

The second half was barely underway when Huesca went ahead through a fine Javi Galán goal, while Mikel Rico and Rafa Mir both struck the crossbar in quick succession. Real Madrid refused to be shaken though and a short time later they were level. Asensio broke through the lines down the middle and was brought down on the edge of the box. Benzema took the set-piece and as it cannoned back off the bar, Varane was on hand to head home and make it 1-1. From then on, the Whites threw everything they had at the game, and with an hour gone Asensio was at the centre of the action once more, leaving four opposition players in his wake and winning a corner. Courtois then had to be alert to keep out Rafa Mir’s header.

All to play for
A lovely one-touch move involving Benzema, Modrić and Asensio saw the Frenchman alone in the box but his left-footed drive was kept out by Álvaro. Marcelo then entered the fray, and quickly tried his luck with 67 minutes gone. In the closing stages, Madrid enjoyed a glut of fantastic chances. Benzema shot from point-blank range on 75’ and looked to bend one into the top corner on 80’ but Álvaro saved his team twice in quick succession. The comeback was finally complete on 84 minutes, when Kroos whipped in a free-kick, Casemiro nodded it down for the keeper to parry and Varane again popped up at the back stick to turn home and clinch a 1-2 win. 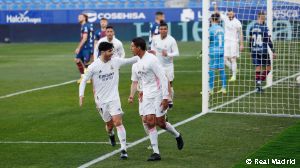 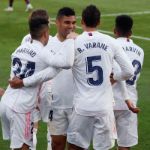