"It means a lot to me to reach this milestone and I hope to continue for much longer," explained the forward after equalling Bullock's 364 games.
Jeffery Taylor is now the second foreign player in terms of league appearances for Real Madrid. With the game against MoraBanc Andorra on matchday 21 of the league, the forward has now made 364 appearances, and moves level with Bullock, another Real Madrid legend. Only team-mate Jaycee Carroll is ahead of him (668). Taylor evaluated his record after the game: "It means a lot to me to reach this milestone and to catch up with Bullock. He's a player who was here for a long time and helped to create a successful team. I've been lucky to have great teammates and to be healthy enough to be able to play all these games. I hope to continue like this for a long time.”

"To play in a team like Real Madrid you have to understand your individual role and what you have to do to help the team win. You have to forget your ego and put all your focus on winning. I found my role and I know what the team needs from me to win, to be successful and to compete for trophies".

Challenges to achieve
"We've had very good years, we've won many trophies and when you win you want more. We want to win every game and every competition we play in and win more trophies. That's what it means to play for Real Madrid.”

6 seasons and 11 trophies
He has played his 364 games in 180 the league, 163 EuroLeague, 14 Copa del Rey and 7 Super Cup. Since joining Real Madrid in the 2015/16 season from the Charlotte Bobcats, Taylor has been key to the success of Pablo Laso's side. In his six seasons at the club, he has won 11 trophies: 1 EuroLeague title, 1 Intercontinental Cup, 3 League titles, 3 Copa del Rey trophies and 3 Super Cups. 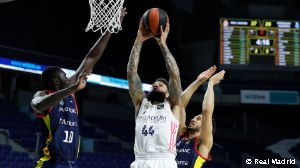