After trailing by 12 points with six minutes remaining, the Whites had the last play to tie or win the match.
WiZink Center

79
Real Madrid came off second best against Crvena Zvezda in the rearranged EuroLeague Round 19 match-up. The Whites battled on right until the final second after being 12 points behind with six minutes remaining and had the final play of the game to win the match or force overtime. Laprovittola, who posted 10 points and a PIR 18, was the standout performer for Pablo Laso’s men. Meanwhile, Rudy was forced off in the final minute after receiving a knock to his back.

Crvena Zvezda caught Madrid cold from the off with a very aggressive approach and dominated in the offensive rebounds through former Madrid man Kuzmic and some fluid attacking play involving Walden (10 points). This saw the guests rack up a seven-point lead at 9-16 in the sixth minute against a Real Madrid side that was blowing hot and cold. However, Laso’s troops gradually began to find some consistency in attack and Laprovittola (8 points and 4 assists) weighed in alongside Tavares (6 points) in the attacking stakes. It didn't take long for the Serbians to respond and before the first quarter was out Madrid found themselves trailing again (21-23).

Whites’ improvement
The slow tempo continued on into the second stanza and Madrid was in an uncomfortable position against a very solid Crvena Zvezda set-up. With the second unit now out on court, the Whites upped their defensive aggression in the opening exchanges of the second quarter, in which they managed to take the lead through some excellent work at both ends of the court from Thompkins and Tyus (29-25, min. 13). The Serbians, however, showed all of their competitiveness and the visitors responded to the madridistas’ surges (in the form of three-pointers from Rudy) with a run at the end of the first half in which they tore up a 0-5 to retain their lead at the interval (40-45).

Crvena Zvezda continued to do damage with its system of open centres. Reath made it 43-50 in the 23rd minute. Taylor, with his points and defensive work on Walden, and Deck were the players who paced a Madrid side that was lacking consistency in attack. It was this frailty that prevented the hosts from catching up with the guests, who always seemed to produce a key basket to keep themselves at arm's length. A technical foul awarded to the Whites and two free throws from Dobric closed out the third stanza as the Serbians established their biggest lead of the night (58-66).

Time to suffer
Things were to get even worse for Madrid as the guests increased their advantage to 12 points at 58-70 in the 34th minute after capitalising on Madrid turnovers. There was now no room for error as the Whites went all out in search of a comeback. Rudy was everywhere in attack and defense in the number four role until he had to come off with a minute remaining after picking up a knock to his back following an unsportsmanlike foul from Lazic that was confirmed by the instant replay.

Thompkins netted two free throws to make.it 73-76 and the comeback looked as if it was on. Laprovittola posted points from the personal foul line to make it 77-78 with six seconds left. Colom missed one of the free throws and Real Madrid had the final play with 5.6 seconds to go and the scores at 77-79. Caroll failed to find the basket and the Belgrade-based team came away victorious (77-79, min. 40). In three days’ time, the Whites travel to Tel Aviv to take on Maccabi (8:05pm CET). 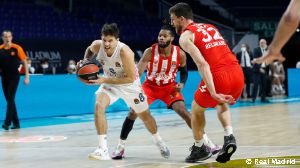 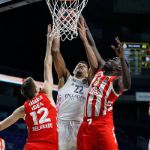