“We are a unique club, one that never gives in, the one that's won 23 European Cups, 13 in football and 10 in basketball", added the president in his opening speech at the Ordinary General Assembly 2020.
Real Madrid president Florentino Pérez opened the club's Representative Members' General Assembly 2020, held virtually in light of the exceptional circumstances surrounding the COVID-19 pandemic. The president began his speech by paying tribute to “all those who have left us both in our country and around the world", among whom are former president Lorenzo Sanz and several ex-football and basketball players including Goyo Benito, Ico Aguilar, Juan Cruz Sol and McNamara. He also remembered Kobe Bryant, Maradona and Paolo Rossi.

“This pandemic has changed life as we know it. We're faced with an unprecedented situation which would have been impossible to imagine and which has had a serious impact on every facet of society and of course, the world of football. The last game played before lockdown in our country was back on the 8th of March. We're heading into a difficult reality, the consequences of which are still unknown at this stage. We all know we'll have to travel a long path full of obstacles, facing up to this adversity, but we're a unique club, one that never gives in, the one that's won 23 European Cups - 13 in football and 10 in basketball".

Unity
“It's a new age which we will head into in precisely the same way this club has always dealt with adversity throughout its 118-year history. We will get through it, as we always have, thanks to the unity of our members. It's thanks to this togetherness, commitment and loyalty that you have all shown once again, that we've been able to take on this immense challenge. Our unity has given us the institutional stability that our club enjoys today. I would like to thank you for your compassion in light of all the decisions we have had to make, including what for us was the toughest of all; playing our matches without the presence of our members and fans. Our management of the greatest sporting institution in the world is based on the rigor which led us to imposing a huge cost-cutting exercise last season that has allowed us to continue guaranteeing our economic solvency".

34th LaLiga title and 11th Spanish Super Cup
“Our players have always felt your support and strength, leading them to clinch the club's 34th LaLiga title - undoubtedly the toughest of the lot. We feel very proud of this historic title. It will surely live long in the memory of every madridista and a group of players who, during a season that will forever be remembered by all of us, gave it their heart and soul to bring their fans some joy. We're also proud of our fans, who celebrated the title responsibly, in exemplary fashion".

“The season ended with two titles which serve to add to our trophy cabinet: LaLiga and the 11th Spanish Super Cup, another historic trophy as it was the first time the tournament was played beyond Spanish shores, in Jeddah, Saudi Arabia, in yet another reflection of the universal appeal of Real Madrid. We continue to enjoy a winning cycle which has seen us clinch 19 titles in the last 10 seasons. In an increasingly difficult and competitive footballing world, that figure underlines the enormity of what we've achieved".

The squad
“We maintain our faith that this team can once again rise to the huge challenges posed by this season, which continues to be played in exceptional circumstances. This team will already go down in our history, as will our coach, Zinedine Zidane, who has now won 11 titles at the Real Madrid helm to boast the second highest number of wins of any coach in the club's history. He's a symbol as both a coach and as a player, with his goal in the final of La Novena being voted the best ever in the European Cup".

“All we have achieved is the fruit of sporting policies which ensure we capture the most extraordinary players, placing an emphasis on young talent; the model that has brought us so much success so far, something we've always referred to as the Bernabéu equation. Our planning has brought us many titles and has also made sure we have been able to navigate this difficult time serenely with the ability to adapt from a financial point of view".

Academy
“We were treated to another wonderful moment last season when our Under-19s, led by another of our most prolific captains, Raúl González Blanco, won the UEFA Youth League for the first time. We all had the pleasure of enjoying a generation of young talents who went on to lift the title at the final phase held in the Swiss city of Nyon. It was the only competition that went ahead, the rest all having been suspended in light of the healthcare crisis. I'd also like to reserve a few words for one of our academy graduates who became a club legend. Our captain Iker Casillas announced his retirement from professional football. Iker is role model and a legend for all of madridismo”.

Bernabéu transformation
“We're embarking on a project which will be a hugely important point in Real Madrid history: the remodelling of the Santiago Bernabéu, pride of madridismo. Over a year of work has already been completed and we are starting to see how the transformation of what will be the greatest stadium of the 21st century is taking shape. It will become a state-of-the-art icon for the world of sport, the city of Madrid and our country as a whole. It's a symbol of Real Madrid, which will be the pride of all the madridistas across the world. Beyond our Santiago Bernabéu stadium, Real Madrid City is also one of the benchmark sporting facilities in the world today".

Women's team
“The 13th of July this year was a historic date for our club. It was the day that marked the birth of the Real Madrid Women's team. Real Madrid has added its contribution to what has become a worldwide phenomenon. We start out on this path eager to compete in the National Women's First Division and the Copa de la Reina with our first team. We've also put in place an academy structure at senior, youth and junior levels. It's an academy that will allow us to remain faithful to our philosophy of scouting, training and developing promising young talents”.

“I'd also like to send a message of support and strength to our player Anthony Randolph, hoping he will recover from his injury as soon as possible. All the madridista fans will be by his side”.

Financial management
“The management we've been carrying out all these years has allowed us to maintain a very solvent financial position which, in light of this immense crisis we are living through as a result of the pandemic, has allowed us to navigate serenely through what is a difficult situation. Of course, the 2019-2020 financial year has been impacted by the effects of COVID-19, a set of circumstances that will persist throughout this season, resulting in a budget for this year which reflects the enormous consequences. The reality is that all big football clubs are suffering this significant financial blow and we're not immune to it either. These cost-cutting measures have seen the club close out the 2019-2020 financial year with a positive financial result of 313,000 euros".

Real Madrid Foundation
“It is a time for austerity and, above all, solidarity. We have thrown our weight behind the Real Madrid Foundation in order to help those most in need. Our Foundation has collaborated with all administrations and institutions, making a donation of 3,600,000 euros in an attempt to mitigate the effects of the pandemic, particularly early on when the need was at its greatest. And our Santiago Bernabéu stadium became a logistical centre for the provisions of healthcare resources despite the significant transformation currently being carried out there”.

Future
“Football must adapt to these new times. Real Madrid will be at the forefront as it always has been, looking out for what, in the words of the president of FIFA Gianni Infantino, should always be football's priority, the interests of the fans. Reforming football cannot wait and we have to get down to it as soon as possible. The biggest clubs in Europe have millions of fans spread across the world. We have the responsibility to fight for this change, a change that we should approach from the perspective of solidarity”.

Solidarity
“This is the strength with which we approach the present and the future. A caring Real Madrid. A club that builds dreams for people who devote their lives to every game our team plays. They may have a vast range of languages, cultures, religions, ideologies and social conditions, but all are brought together by Real Madrid. A unique club that never gives in. The one that's won 23 European Cups - 13 in football and 10 in basketball. Dear representative members: now, more than ever, I wish you and your families all the best of health". 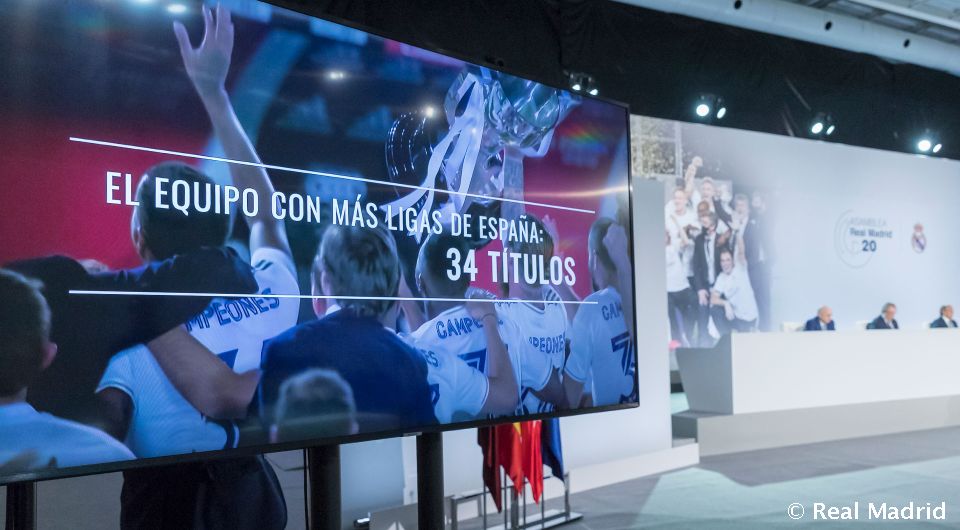 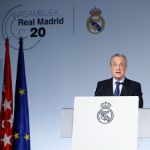