"The vibes are good and we want to keep this winning run going", commented
Alocén in the build-up to the match against Fenerbahçe.
Pablo Laso and Carlos Alocén addressed the media ahead of the EuroLeague Round 10 match-up between Real Madrid and Fenerbahçe. The Whites' boss explained that: “We’ve put four straight wins together in the EuroLeague, but we've always had the feeling that every match is dangerous and that's also the case for our next one, against Fenerbahçe. We've played EuroLeague finals and semi finals against them. Real Madrid v Fenerbahçe and vice-a-versa is now a classic match-up. Last time out we played make Maccabi and we're talking here about great European teams”.

“The team is now more solid defensively and offensively. It's at this stage of the season when we’re showing our improvement. The key is to gradually improve aspects of our game that we were struggling with before, such as turnovers, rebounds, 1 vs 1 situations and helping each other. We're gradually seeing the kind of team we want to be and the results are reflecting that”.

Fenerbahçe
“It's a very powerful team. They did some very good business in the market. They lost key players in Obradovic and Sloukas but in Kokoskov they have a new coach with a great CV and they've signed Ulanovas, Barthel and and Brown. They're dangerous players in a team that rotates a lot. I believe that every EuroLeague match is really demanding and that the important thing now is to recover, improve and put in a good performance to get the win”.

“Each game is different but trying to have that security of a good defense always keeps you in the game. It's key that we have that feeling of having strung together a number of good defensive performances, dominated the rebounds and playing to a good tempo. We’ve really improved in that respect in recent games and I think that will be key against Fenerbahçe as well”.

Alocén: “The vibes are good”
“The vibes within the team are good. We're on a good run, having won four games in a row and we're performing better than we did in the opening rounds of the EuroLeague. We're playing well, and as a team, moving the ball around and we’re doing well in defense. We're happy but we want to continue to look up the league and keep this run going”.

Fenerbahçe match-up
“It's better to be going into the game on the back of the kind of win we got against Maccabi. That makes us even more motivated to continue our run. Fenerbahçe is a really tough team. We can't be feeling over-confident because they've got some very good players and all of them are dangerous and it'll be a really tough game. We’ll have to be really focused and try and get the win”.

Motivation
“After winning in Serbia and with these two matches at the WiZink Center it’s now really important that we win them all as that will give us a real confidence boost for what lies ahead. After this one we’ve then got Moscow. There's no let-up in the EuroLeague. We managed to win our first game this week and now we're on to the second match”. 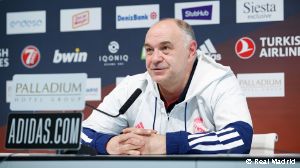