The defending champions kick the campaign off at Real Sociedad on the weekend of 20 September.
Real Madrid now know the club's fixture list for the 2020/21 LaLiga campaign. The reigning LaLiga champions open the season with a trip to Real Sociedad on the weekend of 19-20 September. On account of both teams' involvement in European competitions in August, the Matchday 1 fixture between Real Madrid and Getafe has been rescheduled for February or March 2021. The calendar is asymmetric, meaning that the order of matches in the second half of the campaign is differs to that of the opening half of the season. 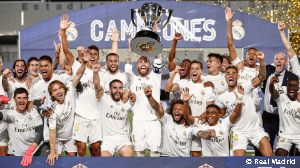