The side is playing the LaLiga matchday 36 encounter tonight at 10pm (CEST).
Real Madrid have arrived in Granada, where they will take on Granada tonight at the Nuevo Los Cármenes stadium (10pm CEST). The Madrid traveling party, led by the president Florentino Pérez and with 23-man squad, set off from the Adolfo Suárez Madrid-Barajas airport heading for the Andalusian city, where they landed after a one-hour flight.

From there, they travelled to the hotel where they will remain until shortly before the LaLiga matchday 36 encounter, where they will be looking for their ninth consecutive win. 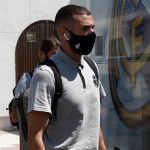