The forward, who was unveiled on the 9th of July 2009, is the fifth-highest goal scorer in the club's history.
Today marks 11 years since Karim Benzema's arrival at Real Madrid. On the 9th of July 2009, the French forward was presented to the Santiago Bernabéu, where he was joined by Florentino Pérez and Alfredo Di Stéfano. During his time in Madrid, he's fast become a club legend and is the fifth-highest scorer of all time, with 244 goals. Throughout the last 11 years, he's made 508 appearances and clinched 18 titles.

His madridista debut came on the 29th of August 2009 against Deportivo. A short time later, he picked up his first goal in a LaLiga clash with Xerez, on his way to collecting a quite remarkable trophy haul made up of 4 European Cups, 4 Club World Cups, 3 European Super Cups, 2 LaLiga titles, 2 Copa del Rey trophies and 3 Spanish Super Cups.

Key man
Despite being the team's leading marksman for the last two seasons (30 & 22 respectively), Benzema is not only renown for his goal-scoring exploits. His link-up play with his teammates on the pitch is what really makes him standout. The latest example of his selfless efforts was the sublime back-heeled assist he provided for Casemiro to net in the clash with Espanyol. He is undoubtedly a crucial part of Madrid's fight for the LaLiga title. 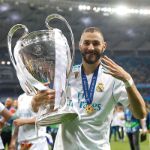