The north and south stands were the first sections to be dismantled.
One of the major features of the future Santiago Bernabéu will be the stadium's new roof. Work on the roof began with the removal of the sections of the previous roof at the south and north stands, whilst the extendible part, metal sections and polycarbonate plaques on the side of the stadium that runs along the Castellana were removed.

One of the next significant steps, along with the removal of the roof on the east side of the stadium, was the installation of 800-tonne cranes that will serve to hoist the new roof's main beams. Meanwhile, work to make the stands waterproof and to collect water has been completed so that they are protected.

Cutting-edge roof
The new roof is central to the stadium's covered and cutting-edge appearance with its fixed structure set to cover all of the seats within the stadium. The roof, which will be retractable, will also extend over the pitch. Meanwhile, the roof also represents a commitment to the environment, given that it will reduce the sound and light pollution in the surrounding areas. 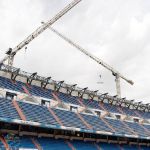