Madrid round off a perfect 6 days by beating Zaragoza, with seven players posting double-digit PIR, while Spagnolo made his debut.
WiZink Center

Real Madrid completed a perfect week with a third win inside 6 days (Olimpia Milan and Asvel in the Euroleague double-header) after running out convincing victors over Casademont Zaragoza on League match day 23. The Whites continued their fine spell of form up against the third-placed team with another superb team performance despite a glut of injuries. Seven players posted double digits in PIR, led by Campazzo, Tavares and Garuba. Spagnolo made his debut to become the fourteenth academy product to do so under Laso's tutelage, and the madridistas extend their unbeaten run to 12, dating back to February the fourth.

With 6 players out (Llull, Taylor, Deck, Randolph, Mickey and Mejri) and 4 youth-teamers in the 12 (Garuba and Nakic, from the first team and Spagnolo and Tisma, from the Júnior side), Real Madrid faced a clash with one of the competition's most in-form teams. After a back-and-forth start (11-12, min. 6), the Whites were first to pull away with a 10-0 run. Garuba and Tavares' efforts on the offensive rebound and an attack led by Carroll (8 points) saw all of the starting five post points to go 10 ahead (21-12, min. 9).

The Whites run away with it before the break
The visiting response was immediate. Through swift, direct play and high triple percentages (two for Alocén), they broke the madridista defense to level the game at 26 with 14 minutes gone. By this time though, the key difference had entered the court: Rudy. The Balearic Islander flipped the dynamic of the game, bringing energy and aggression to the Whites' defense alongside Garuba and Causeur. Up top, with 8 consecutive points for 11 in the quarter, he spearheaded a 21-5 run in the closing stages of the first half to send Laso's men in on a high (47-31, min. 20).

The madridistas' solidity, reflected in their five players with PIR in double digits already (Campazzo, Rudy, Garuba, Thompkins and Tavares), made sure they maintained the gap above 20 points (66-43, min. 27). The defense continued the high levels they'd hit in the second period to shut down Casademont Zaragoza, who, without much luck from the three-point line and their legs fading, were unable to match the hosts. The Campazzo-Garuba link had the WiZink Center in raptures while Carroll kept adding to his tally to become the team's top scorer (14), in a third quarter which all but confirmed the result (68-51, min. 30).

Team's response and debut
The visitors gave it everything they had at the start of the fourth and  Barreiro and Benzing brought the gap to below ten points as Real Madrid's pace dropped off. The Whites reacted in emphatic fashion, though, with baskets for Causeur, Garuba, a spectacular dunk, Laprovittola and Thompkins, to see off the fightback and indeed reach their greatest lead in the match (+22). Towards the end of the game, Laso handed a debut to Spagnolo and the team finished up with four academy graduates out on court: Nakic, Tisma, Garuba and the Júnior's Italian guard (92-70, min. 40). It's another win for the Whites, now 12 in a row, and next week brings Crvena zvezda and Montakit Fuenlabrada. 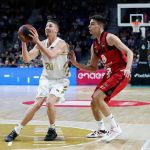