The 21-year-old forward has scored 27 goals this season and is a Serbian international.
Luka Jović (Bijeljina, Bosnia and Herzegovina, 23/12/1997) is a new Real Madrid player. The Whites have secured the services of a forward who has been one of European football's breakout stars this season. At 21 years of age, he is already a full Serbian international, and he comes to the club from Eintracht Frankfurt, where he scored 27 goals and made 48 appearances in the 2018/19 campaign.

A powerful forward with neat technique and an eye for goal, he is strong off both feet and his finishing is second to none. Despite his young age, he has already enjoyed extensive experience at the top level in Europe, as he showed in the recent Europa League campaign, notching 10 goals and taking his team to the semi-finals. He's also won titles in Serbia, Portugal and Germany, all three countries in which he has played so far.

Dream debut
After coming through the FK Crvena zvezda academy, he made his first-team debut by scoring the title-winning goal in the 2013/14 campaign. He came off the bench with his team 3-2 down, before netting the equaliser which was enough to clinch the league trophy and becoming the club's youngest ever goal scorer in the process. After making a name for himself in Serbia, where he won 2 SuperLigas, he moved on to Benfica, where he played for the academy and first team. During his time in Portugal came his Champions League debut, while he also lifted 2 league titles, one Cup, one League Cup and one Portuguese Super Cup.

He joined Eintracht Frankfurt in 2017 and played a crucial role in lifting the Cup in his first season, netting the goal that sent his team to the final. After appearing at the World Cup in Russia with Serbia in 2018, he started his most impressive season to date. He was Eintracht's key man as they came close to the Europa League final and was also one of the Bundesliga's leading scorers (17). He also opened his international goal-scoring tally back in March with a strike against Germany. 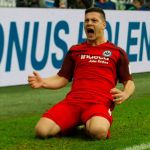