The madridistas clinched the final in the last quarter as Ndiaye put in a stellar performance (22 points, 20 rebounds and a PIR of 32).
Real Madrid have been crowned Minicopa Endesa champions for the seventh season in a row after beating Iberostar Canarias 80-68 at the WiZink Center. Alberto Muñoz's charges showed solidity and fine team play, with five players hitting double digits on points, clinching the title with a superb final quarter.

The Whites were dominant from the very early stages, led by the inspired Abdou Ndiaye, and they went into the break eight points up (41-33). The reaction from the Canary Islands-based side in the third quarter levelled what was an enthralling encounter.

The champions edge ahead in a hotly-disputed final
The outside accuracy of Bruno Vidarte (12 points) and Kaya Mutambirwa (11) was crucial in a 9-0 run in the last quarter which tipped the balance of the tie in the home side's favour. The Under-19s finished the job, stepping up at the most vital moments to ensure captain Abel Delicado would lift the team's seventh successive Minicopa Endesa. 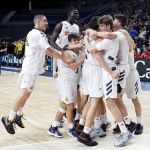