"It's a unique feeling, it's has been a really great year for me", declared the Real Madrid midfielder.
Luka Modric has tonight been crowned as the best player in the world, with the Real Madrid midfielder claiming the 2018 Ballon d'Or in Paris. France Football, who award the prestigious accolade, recognised the Croatian's outstanding year at an event attended by a large number of Real Madrid representatives, headed up by president Florentino Pérez. Modric saw off competition from Cristiano Ronaldo, Antoine Griezmann and Kylian Mbappé in votes cast by journalists from across the world.

Since the last Ballon d'Or was award, Modric has led Real Madrid to Club World Cup and Champions League glory. He produced two stellar performances in Abu Dhabi en route to clinching the tournament's Golden Ball award. In Europe's elite club competition he was instrumental in securing the club's thirteenth European Cup crown and was named as the competition's top-performing midfielder.

What's more, in the summer he captained Croatia to a historic spot in the World Cup final. After weighing in with two goals and producing two Man-of-the-Match performances, he landed the Russia 2018 Golden Ball award. This calendar year has also seen Modric secure FIFA's The Best Award and the UEFA Men's Player of the Year distinction.

Modric: "I thank my Real Madrid teammates"
"It's a unique feeling to be here. I'm proud and am really happy. It's a mix of emotions that are difficult to explain. I want to thank everyone who has helped me to make this dream come true. My thanks go to my Real Madrid teammates and all of the club's staff. I also want to thank my teammates from the Croatia national team. I'm also grateful to my family because it's thanks to them that I'm a better person and they've helped me to become a better professional".

"My dream was to play for a big club and win trophies. Winning the Ballon d'Or was a dream of mine as a child and it's a privilege to be here with the Ballon d'Or in my hands. There are no words to describe how I feel. I'm here amongst some world-class players. To be here and win this trophy means that it's been a great year for me, in which I've won a lot of things".

"I still can't believe it. I'm now part of a group of great players who, in the history of the game, have won the Ballon d'Or. It's difficult to pick out one moment from my career. I knew that I had to work hard, fight and showcase my inner talent. Things don't come easy and you've got to work for them. If you work hard, your opportunities come and you've then got to take full advantage of them. Since I've dropped deeper into a midfielder role, I've become a better player and it's seen me develop as a footballer". 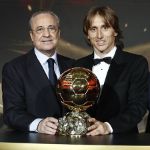