They came from behind against Boca Juniors and will now play in the Club World Cup.
With the atmosphere of one of the big nights, the Santiago Bernabéu hosted a final that will go down in the history of world football. The Copa Libertadores as a privileged spectator and the two titans of Argentine football fighting it out on the best possible stage. River Plate and Boca Juniors made sure that the show and the passion were the stars. And in this incomparable setting, River Plate were crowned champions.

A long way from the 2-2 draw in the Bombonera almost a month ago and both teams knew that the decisive moment had arrived. The nerves were palpable in every attack and the set pieces were the most used weapons to create danger. The first chances fell to Boca in the 10th and in the 30th minutes, however Perez was unable to beat Armani in the first opportunity and then failed to hit the target with the second.

Goals
River responded with set pieces through Palacios but it was Boca Juniors who took the lead. Benedetto, on a counterattack, found himself in front of the goalkeeper and he finished with style to give his side the lead just before the break. After the interval, River tried to take the match to their opponents and in the 67th minute, after great play by Fernandez, Pratto leveled up the contest. It was obvious that nobody wanted to lose the battle and the Santiago Bernabéu enjoyed extra time in the final of the Copa Libertadores.

Decided in extra time
Boca were reduced to ten men at the beginning of extra time after the sending off of Barrios, and from then on the red and whites took control. In the 108th minute they got the decisive goal. Quintero struck a left-footed shot from the edge of the area which clipped the crossbar on its way in. Boca tried to get an heroic equalizer and also hit the post in the last minute and as they threw up the keeper in one final attempt, Martinez got the third and final goal for River, breaking in to the Boca half and rolling the ball in to an empty goal to clinch the continental title. Real Madrid had waited to find out their last opponent in the Club World Cup and it is none other than River Plate, the side crowned the new champions of the Copa Libertadores at the Santiago Bernabéu. 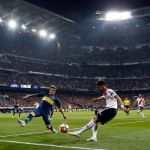