The center broke the anterior cruciate ligament in his left knee on 19 October 2017, in the game against CSKA.
If Real Madrid's Endesa League Matchweek 2 contest against Valencia Basket at La Fonteta represented a special occasion for anyone then that someone was Ognjen Kuzmic.  After featuring for a few minutes in pre-season in the Costa del Sol Tournament, the center returned to competitive action for the Whites in the wake of the serious injury he suffered, playing 4:28 minutes in Valencia.

Kuzmic picked up the injury on 19 October 2017, against CSKA Moscow, in the second quarter. The following day, medical reports confirmed that he had completely broken the anterior cruciate ligament in his left knee. Nearly a year has passed since his last competitive game and the center is now back in the fold and ready to held Real Madrid fight for glory on all fronts. 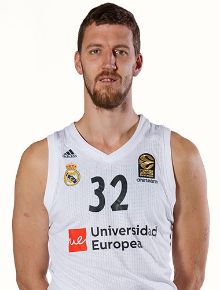