"The Santiago Bernabéu is a place full of emotion for everyone here. It is part of the experiences we’re having now, and our past memories. We want a 21st century stadium with the best comfort, where members and fans will have unforgettable experiences, incorporating the newest technology. It will be one of the most attractive places for anyone visiting Madrid from anywhere in the world. We’re looking at a unique stadium in an unbeatable location, in the heart of the city itself".

Image
"The renovated stadium will have a new image, that will be unique and never before seen, a layer of steel bands and varying lines that will be lit up and will also project images. This will include a fixed and a retractable roof that covers the pitch, so that all areas, as well as new seats, will be protected. An iconic stadium, emore modern, more comfortable, safer, with a new technological concept and with new leisure, catering and entertainment areas for the whole family".

"Situated in the heart of Madrid, surrounded by all kinds of services and means of transport, and now with an entrance that will improve its urban environment: a large square next to the Castellana main road of more than 20000 m2 in size, and another of 5500 m2 in the corner of Calle Padre Damián, thereby turning Calle Rafael Salgado into a pedestrian street".

Economic soundness
"In this stadium, the legend of Real Madrid has been created, it is the home of everything Real Madrid stands for. December will mark 71 years since the stadium’s inauguration and building it was not easy in one of the toughest times in our history. Our current situation, of great economic safety, makes the club ready to tackle one of its greatest challenges: to turn the Santiago Bernabéu stadium into the best stadium in the world. Santiago Bernabéu paved the way for us. Real Madrid will have the best facilities and the most modern facilities for the best players in the world and will therefore continue to lead the way in terms of titles and in revenue".

"The new 21st century Santiago Bernabéu will be the setting for the excitement that Real Madrid has in store for the future, the best stadium in the world to be recognised again at the end of this century as home to the best club of the 21st century. A new stadium, heritage and pride of our members and fans. We think that the best formula today to face this comprehensive remodelling of the Santiago Bernabéu stadium, is to resort to long-term financing. Our soundness and our financial strength allow us to do so".

Great opportunity to self-finance
"We have perfect conditions for long-term financing with low and fixed interest rates. We now have a great opportunity, this may be temporary and we should not miss this chance. Our revenues have also increased by 30% in the same period and our net debt has gone into the black by 107 million euros."

"The cost of this financing at fixed and long-term interest would mean an average annual fee of around 25 million euros, which is less than 4% of our revenues from last season and would have no impact on our sports or our sporting model."

Revenue
"The new operating model for the stadium will make us bring in more than 150 million euros extra per season, and therefore we will have more recurring and constant income to keep up our sporting and economic leadership. We want to be the first club in the world to break the 1000-million-euro revenue barrier".

Digital stadium
"We want to turn the stadium into a technological platform where we can interact with members and Real Madrid players from all over the world. Technology will be one of the essential features of the project, as an example of an interior space for e-sports, and the installation of a spectacular 360-degree video scoreboard within the stadium's architectural structure incorporating the latest digital advances. This means a digital Santiago Bernabéu stadium".

"Technological advances and the application of audio-visual media will be present in many areas of the stadium so that from their seats, members and fans can enjoy club content on their phones and tablets that liven up the experience of live games. It is what is known as the 'second screen' ".

Extension of the Museum
"There will be a spectacular expansion of the current Museum in the area of ​​Castellana with much more floor area and a new interactive Museum will be created with the latest virtual reality technologies in the area of ​​Padre Damián. At the same time the experience of the Bernabéu Tour will be extended with the creation of a panoramic tour around the perimeter of the roof around the entire stadium with a new offer of leisure and restoration".

Commercial fare
"The commercial side will increase in a great way: we will have two Real Madrid stores, one in Castellana and the other in Padre Damián, which will bring together all the products offered by our brand. We will also develop a new commercial concept with digital points of sale of the most prestigious electronics and consumer brands to turn common areas into a showcase for global news."

Increase in access and security
"The security, accessibility and evacuation plans for the stadium will improve substantially for all fans. The demolition of the shopping centre and the construction of the two new towers in La Castellana with new ramps, escalators and elevators, will allow a more balanced and homogeneous accessibility and evacuation. There will be better, wider access, with more entry points, especially when the Bernabéu corner disappears, and fans will have better, quicker access, by installing new escalators on the sides of Castellana and Padre Damián to the highest point of the stadium itself".

Costs
"The project, which has already been adapted meet the needs raised by the ruling of the Superior Court of Justice of Madrid, has caused an increase in costs. We think that the budget of the investment in our stadium will amount to around 525 million euros. The most important items correspond to civil works, around 300 million euros, and technological equipment and innovation, which means a cost of just over 100 million euros."

Deadlines
"We hope to get the green light early next year so that work can begin immediately. The most important Spanish construction companies would opt to take charge of these works. I want to make it very clear that no ACS Group company can participate, in compliance with the Code of Ethics of the Board of Directors of Real Madrid, as it has always been during my presidency. The estimated time for the development of the works is approximately 3 and a half years, and there will not be any changes to the sporting calendar". 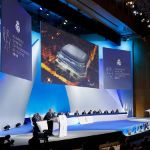