The Whites put in a brilliant performance and beat their opponent thanks to goals from Asensio and Bale.
MetLife Stadium (East Rutherford, New Jersey)

1
In their build up to the new season, Real Madrid continued to pick up pace and rhythm in the International Champions Cup and ended the 2018 American tour with a convincing victory over Roma. The Whites, who were superior to their opponents, put in a great performance and, thanks to goals by Asensio and Bale, recorded their second victory of the pre-season.

The madridista whirlwind eclipsed the electrical storm that delayed the start of the meeting at the MetLife Stadium in East Rutherford (New Jersey). Gareth Bale was the man to lead the way as Lopetegui’s side’s early dominance was turned in to goals in the opening stages. With just minutes on the clock, the Welshman played a sensational pass with the outside of his foot, in behind the Roma defence to pick out Asensio who beat Olsen in a one-on-one, to score his third goal of the summer.

Second goal, the work of Bale
Although the Italians tried to react and tested Keylor Navas in the Madrid goal with a powerful strike from Dzeko, Real Madrid kept up the high levels of intensity and extended their advantage after a few minutes. The first quarter of an hour of play had not passed when, after a long ball from Carvajal, Bale himself showed his speed to get around Marcano and beat the Swedish goal to net the second goal of the game.

The Whites looked comfortable out on the pitch and ended a great first half. They controlled the centre of the park, denied the opposition space at the back whilst creating problems at the other end of the pitch with Benzema forcing a save from Olsen after 37 minutes, Fazio kept out an Asensio effort on the line and then in the 43rd, Ceballos hit the post with a strike from outside the area.

Rotations
As usual in pre-season, Lopetegui spread out the minutes between his players in the second half. One of the second-half changes, Vinicius Jr., was almost on the score sheet in the 60th minute, but his shot went slightly off target. Although Real Madrid didn’t lose control of the match until the end, Roma reduced the deficit with 83 on the clock through Strootman. 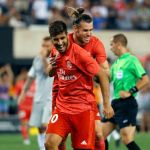