The president, who was recognised for his management of the Whites, said: “Real Madrid is an institution with the social stability and financial solidity which allows us to remain independent”.
Florentino Pérez has been awarded at the Premio Los Leones 2017, presented by the publication El Español, for his management of Real Madrid. The president picked up the prize at an event which took place at the Teatro Real in Madrid, which was also attended by Pedro López, third vice-president; José Ángel Sánchez, director general; Emilio Butragueño, director of Institutional Relations; Zinedine Zidane and first team captains, Sergio Ramos and Marcelo. Ignacio Echeverría received a posthumous award for solidarity and Rafa Nadal was recognised for his sporting career.

In his acceptance speech, Florentino Pérez said: “Many thanks to everyone who has thought of me to receive this prestigious award presented by El Español on your second anniversary. I would also like to join the tributes to Ignacio Echeverría. His actions will not be forgotten. This display of civic responsibility and solidarity has brought tears to our eyes, but has also given us strength to continue fighting against terrorism. He's an example to us all”.

“Dearest Rafa Nadal, you're the greatest Spanish sports person of all time. Beyond what you've achieved and continue to achieve as tennis world number 1, you represent sport's greatest values. We madridistas carry you in our hearts and feel proud to have you as such a great ambassador for Real Madrid around the world. Congratulations on this latest acknowledgement”.

Responsibility
“Being Real Madrid president is an honour for me, but also a great responsibility. I ran for the presidency in the year 2000 just because Real Madrid was at risk of falling out of the hands of its members. It was in a very poor financial situation. I thought I could bring rigorous elements of business to the world of football, and thus get out of a poor financial position and consolidate a stable, lasting sporting-economic project".

“Today, 17 years on, Real Madrid is an institution with the social stability and financial solidity which allows us to remain independent so that the members continue to be the only masters of our destiny”.

“By applying this model, we have multiplied our revenues sevenfold and we went from a poor position to a stronger, more stable one. Having the best players here, we bring in greater financial and sporting returns”.

Leaders
“Making Real Madrid professional from a business point of view and ensuring transparency has been, as far as I'm concerned, our management model and what has led us to success. Real Madrid has led all of the most prestigious rankings, the club with the highest revenues and the most valuable club in the world”. 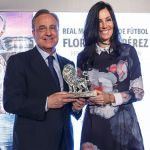