Goals from Ronaldo, who was unfairly sent off, and Asensio give the win to Zidane’s side against an inferior Barcelona.
Camp Nou

3
Real Madrid have put themselves in pole position in the Spanish Super Cup. The tie will be decided at the Santiago Bernabéu stadium, but Piqué's own-goal and the fantastic finishes from Cristiano Ronaldo and Asensio at the Camp Nou mean it’s advantage the to the madridistas ahead of the second leg. The Whites again showed their winning character and overcame all obstacles in their path, firstly a controversial penalty given against them and the unjust sending off of Cristiano Ronaldo for two yellow cards.

The first half finished goalless, despite the LaLiga champions spending more time in the opposition half, there were few clear chances created. Only two, one per team. The first was for Barcelona in the 10th minute, but the shot from Luis Suarez after getting in behind the Madrid defence hardly troubled Keylor Navas. Real Madrid’s chance came in 37', Isco made space for himself before delivering a measured cross that Bale hit first time with his right foot. Ter Stegen showed good reflexes to send the ball behind for a corner.

Piqué's Own Goal
The game changed drastically after the break. It was played at a much higher intensity and just five minutes in Real Madrid went in front. Isco controlled the ball before playing it out to  Marcelo, and Piqué, in the attempt to clear the cross turned the ball in to his own goal. The team had now achieved the most complicated thing, scoring an away goal, and they almost doubled the lead five minutes later. Benzema's spectacular move, leaving behind Piqué after a nice step before crossing for Carvajal who was denied by Jordi Alba who kept out the full back’s effort with a goal line clearance.

Barcelona charged on, looking for the equaliser, but Real Madrid were far from beaten, they kept attacking the opposition box. Cristiano Ronaldo sent in a cross and Asensio, who had livened up the side since coming on, had two clear chances to score. Bale crossed the ball in for Cristiano Ronaldo but he was unable to convert in the 70th minute. The Whites held onto the ball well. The Portuguese striker’s heeled effort set up Marcelo who could only send it into the hands of Ter Stegen, who in turn parried the ball out for the corner.

The penalty
The visitors were having their best minutes but Busquets had a good chance to equalise in the 74th minute as the Whites struggled to clear the danger. Three minutes later the home side were able to finally equalise as Suárez went down easily in the area, Messi was on hand to convert the penalty.

Spectacular goal from Cristiano Ronaldo
Zidane’s players kept up the pressure and were rewarded in the 80th minute. The counter attack was both effective and fast. Isco took the ball up the field towards Cristiano Ronaldo, who managed to get around Piqué, taking the ball inside his marker and sending in a shot that flew past Ter Stegen. A special goal by any account

Asensio seals the deal
The Whites kept on, and a couple of minutes later Cristiano Ronaldo found himself walking off the pitch after a red card. The Portuguese removed his shirt whilst celebrating his goal and received a second yellow for a supossed simulation as he looked for a penalty following a tangle with Umtiti. This twist in the tale did not affect Real Madrid as in the 90th minute, Asensio managed to surprise Ter Stegen with a spectacular left footed strike to bring the tie closer to home and bring the madridistas closer to their second title of the season. The Spanish international showed his calibre for scoring in his debuts in any competition. He has played six as a madridista and scored each time. On Wednesday, the tie comes to the Bernabéu and the Spanish Super Cup winner will be decided. Real Madrid showed in Barcelona exactly why they are the best team in the world. 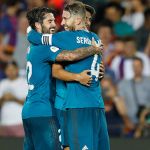