The left back is 19 years old and was one of the sensations in LaLiga last season.
Theo Hernández (Marseille, France; 06/10/1997) is now a new Real Madrid player. The left back will strengthen the Champions League and LaLiga champions after having an exceptional season playing for Alavés, where he was involved in 38 official matches. At only 19 years of age, Theo was one of the most outstanding players in the league last season. In fact, uefa.com included him in the up-and-coming eleven in LaLiga.

Speed, talent, power and ability to beat a man are some of the qualities of the footballer with a great physique, a good defender who present danger when joining the attack. This campaign he was a key player for Alavés, who reached the final of the Copa del Rey and finished in ninth position in LaLiga.

The new Madrid defender scored two goals for the team from Vitoria. One of them a spectacular free kick in the cup final, demonstrating how well he strikes the ball with his left foot. In addition, Theo provided three assists and ended the season among the 10 most successful players in dribbles completed (65).

Under-20 international with France 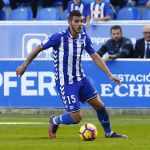