Goals from Benzema, Isco and Nacho hand Madrid the three points against Alavés in the first clash in April.
Santiago Bernabéu

0
Real Madrid have kicked off what will be a very demanding April fixture list with a win as they continue racking up the points in the fight for LaLiga. With just 10 games to go until the end of the season, the Whites sit top of the pile after picking up three more points at home against Alavés thanks to goals from Benzema, Isco and Nacho.

Zidane was forced into an early substitution when Varane pulled up in the 11th minute and Carvajal came on in his place. It was the academy product who would have a key role in the game's opening goal 20 minutes later. He linked up with Benzema, who laid the ball back once more, before the Frenchman fired his cut-back into the back of the net with his left. Right on the stroke of half-time, Bale was close to extending the lead with a shot from inside the six-yard box following a fine ball from Danilo, but his effort flew inches wide of the visitors' goal.

The second half began with a few scares for the home side. In the 48th minute Theo Hernandez crossed for Deyverson whose header went just over. Then 12 minutes later Edgar had a better chance, his volley inside the area went just inches wide of the home goal.

Strong end to the game
The match came alive in the last 10 minutes and Real Madrid looked to finish it off as soon as possible. They almost got the second goal in the 83rd minute after a cross from Carvajal saw Bale's acrobatic effort hit the side netting. Two minutes later the Whites doubled their lead after Cristiano Ronaldo set up Isco, who finished perfectly against Pacheco. The game was well and truly put to bed in the 88th minute after a magnificent free kick from Bale came back off of the woodwork and was headed home by Nacho. The league leaders stand firm at the top. 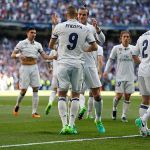