3
Real Madrid made a winning return to LaLiga in Pamplona. The league leaders got a hard fought win against Osasuna in a match where the teams had to adjust to a poor pitch. The teams did not have many chances before going ahead, there was one per team. Benzema had a chance for the visitors on the five-minute mark, but his left footed volley went just wide. There was yet more danger just 13 minutes later when a shot from Fausto on the edge of the box hit Casemiro and forced a stunning save from Keylor Navas.

The game's first goal came on 24 minutes. It was a fine piece of collective play from Real Madrid and an even better assist from Benzema for Cristiano Ronaldo to beat Sirigu one-on-one. The visitors' joy was short lived however, just nine minutes in fact. An assist from Fuentes with his back to the defense and Sergio León was able to chip the ball over the top of a helpless Keylor Navas when the moment arose.

Opportunity for Benzema
It was all square, but the game had suddenly become electric, back and forth, and it was Real Madrid who came closest to going ahead at the break. It was pure role reversal from the first goal. This time it was Cristiano Ronaldo who crossed in on 35 minutes and Benzema shot from just in front of the goal, but Sirigu saved his team's blushes with a stellar save. Keylor Navas was able to make another save in the 43rd when Riviere took a shot from inside the box.

The second period began just as the first half had ended: with a fine save from Keylor Navas, on this occasion to deny Sergio León's left-footed strike in the 48th minute. As the minutes ticked by things became a struggle for the visitors. Injury to Danilo on 57' forced Zidane to shuffle his pack and introduce James, which meant making adjustments to the system. The changes made by the madridista boss worked a treat and on 62' Isco struck to put the Whites back into the ascendancy. The Spanish international seized on the ball in the box after Benzema had burst into the area, before firing past Sirigu into the far corner.

Lucas Vázquez seals victory
By this stage Osasuna looked a very tired outfit and Madrid sought to capitalise on that and put the result beyond the hosts' reach. In the 74th minute, the visitors twice came close to doing just that. Firstly, Cristiano Ronaldo brought down a long, raking pass from Marcelo with a sublime touch before letting fly with an effort that was turned behind by Sirigu. James swung the subsequent corner over and Ramos, celebrating his 500th Madrid appearance, came inches away from heading home at the far post. In injury time, Lucas Vázquez - who appealed for a penalty after having been felled by Oier on 90' - produced a clinical finish to seal the deal for the Whites, whose attentions now turn to the Champions League tie against Napoli. 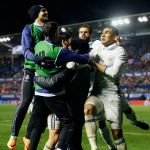