The Portuguese man was chosen by Marca readers as the best player in last season's Champions League.
Cristiano Ronaldo was the star of the event organised by Marca and La Gazzetta dello Sport where he was presented with the Champions League Nº1 award, as voted for by readers on both websites as the best player of last season's competition, following his 16 goals which helped the team to the La Undécima title. Florentino Pérez and Zinedine Zidane also attended the ceremony.

Cristiano: “It's a privilege to win this award”
“It's a privilege to win this award. Thank you to all the readers who voted, and especially to Real Madrid, to my teammates and the fans, who helped us on our way to winning the Champions League. It's a victory for the team because I'd never be lifting this award if I hadn't won anything with Real Madrid. I've won the Champions League and the Euros, it's a beautiful moment in my career and my sporting life. It just makes me want to keep working hard for this club. It's my dream to keep playing for Real Madrid and I really want to stay here for many years because the club holds a special place in my heart”.

Gianni Valenti, assistant editor of La Gazzetta: “It's an honour to award Cristiano”
“It's an honour to award Cristiano on behalf of so many readers. You're a well-loved player in Italy, just like at Real Madrid. Every football fan has two teams in their heart: one from their own country and one of the European giants. In Italy there are people who follow Inter and many of them have Real Madrid too. In our paper we always have articles about Ronaldo or Real Madrid. This prize is particularly special because it's not awarded by journalists or coaches, it's the prize of the people. That's why I think it's more valuable”. 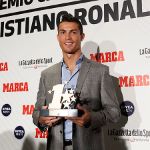