Eduardo Fernández de Blas and Emilio Butragueño presented the Peña Madridista Noruega with a commemorative plaque.
Real Madrid are being backed by numerous supporters' groups in Trondheim. Hours before the game against Sevilla, where the Whites will look to win the European Super Cup (20:45pm CEST), there was a gathering of madridista supports' groups. The second vice-president Eduardo Fernández de Blas and director of Institutional Relations Emilio Butragueño represented the club at the event.

The Peña Madridista Noruega (Norwegian Madridista supporters' group), which has more than 500 members, received a commemorative plaque ahead of the game. La Gran Familia had a large representation amongst the attendees at the event, with members of supporters' groups from different parts of Spain, Holland, and Switzerland. They will be cheering on the European champions tonight at the Lerkendal Stadion where they’ll be hoping to win the first title of the season. 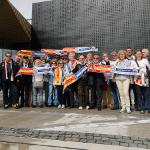