The players celebrated the win in style and took photos with the trophy.
After the tension of the penalty shootout, a madridista party broke out on the San Siro pitch. After Sergio Ramos held the Champions League trophy aloft in Milan, the squad continued the celebrations in the dressing room, and they were joined by club president Florentino Pérez. The players celebrated, making toasts, singing songs and took many photos to commemorate an unfrogettable moment. 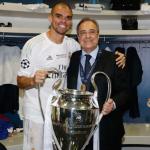