More than 150 madridistas enjoyed the event before the game against Real Sociedad.
Today there was a party for madridistas in San Sebastián. An hour before the game against Real Sociedad (4:00pm, CEST), the hotel Mercure Monte Igueldo welcomed more than 150 Real Madrid fans. Club president Florentino Pérez attended the event and posed for photos with fans, who showed their warmth and support for him. The club's President of Institutional Relations, Emilio Butragueño, also took photos with the fans.

Before this, the second Vice-president Eduardo Fernández de Blas spoke to the fans, saying: “Thank you all for your loyalty to Real Madrid. I would like to express our gratitude for this warm welcome to San Sebastián. It is an honour to be here again and share the unity of madridistas. Your support is fundamental, the fan groups are the pillars of what brings together and gives consistency to this feeling we share”.

“On Wednesday we will be playing the return leg of our sixth consecutive semi-final and we all have full confidence in our team. Our coach, Zinedine Zidane, is making us dream and allowing us to aspire not only to a Champions League final win in Milan but also of another La Liga title, for which it is vital to win the remaining three games”. 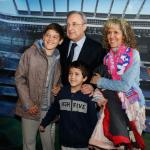