Madrid's goals came courtesy of Benzema - after a great move - and a Bale header, with Kovacic seeing red for the Whites in the 67th minute.
Mestalla

2
Real Madrid picked up a point at Mestalla in a close-fought encounter on Sunday night, one in which they played with ten men for more than 20 minutes following the sending-off of Mateo Kovacic. The game saw the visitors move swiftly into the lead when, shortly after the quarter-of-an-hour mark, they produced a fantastic move in which the BBC were to the fore. Karim Benzema won the ball back in the area in front of the penalty box and combined with Gareth Bale, whose first-time backheel found Cristiano Ronaldo. The Portuguese then delivered a no-look pass to set up Benzema, who finished expertly.

The Whites had the early advantage and, on top of that, were monopolising possession over a Valencia side sitting deep. In the 30th minute, Gary Neville's outfit had a clear-cut opportunity to equalise, Rodrigo De Paul delivering the ball and Joao Cancelo's header flying just centimetres wide. The chance roused the Mestalla support and, driven on by their home faithful, the hosts began to create more regular moments of danger in and around the Madrid area before, in the final minute of the first 45, fortune was not to favour the guests. They saw a penalty not given for a challenge on Gareth Bale and, in the subsequent Valencia attack, a spot-kick was awarded for a Pepe tackle on André Gomes, allowing Dani Parejo to level the scores from 12 yards.

The second half witnessed Real Madrid again make a dominant start, and in the 50th minute they came close to regaining the lead. Benzema cut back for Marcelo, whose goal-bound effort from on the penalty spot was blocked by Lucas Orbán. The Whites were pinning Valencia back in their area and ten minutes later Danilo tried his luck, but his left-footed drive from the edge of the box was gathered by keeper Jaume Doménech. Another opportunity came Madrid's way with 66 on the clock, but Cristiano's volley from 18 yards could not find the target.

A man down
A minute afterwards, Madrid were dealt a blow when referee José María Sánchez Martínez issued Kovacic with a red card for a challenge on Cancelo. Rafa Benítez's men had been left with an even tougher task, but despite that continued to search for a second goal, and went on to get themselves back in front. In the 82nd minute, Toni Kroos flighted over the free-kick and Bale conjured up a fantastic header to beat Doménech. The away team's joy proved to be short-lived, however, as Paco Alcácer netted the equaliser only 60 seconds later. Both sides had chances to score from then until the final whistle, but the clash ended all square. 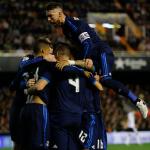