The Portuguese star grabbed a brace to become Real Madrid's highest ever goalscorer and ensure the Whites remain top of their group.
Swedbank Stadion

2
Job done for Real Madrid in their first ever competitive meeting with Malmö, as a double from a history-making Cristiano Ronaldo saw the Whites make it two wins out of two in the Champions League this season. Rafa Benítez's men stay at the head of Group A, where they remain neck and neck with a Paris Saint-Germain side also on six points.

Pressing high up the pitch and recovering possession swiftly, Real Madrid carved out regular attacks on their opponents' area in the opening period and Cristiano was close to putting his team in front a minute after the quarter-hour mark. The Portuguese star began the move with a throw-in for Karim Benzema in behind the Swedes' defence. The Frenchman showed majestic skill to swivel on a sixpence and cut the ball back towards the penalty spot for Cristiano, who forced goalkeeper Johan Wiland into a fine stop.

The Whites take the lead
The chance proved a warning signal of what was to come: in the 29th minute, Mateo Kovacic launched a counter-attack with a superb pass to find Isco, and the Andalusian looked up to find an unmarked Cristiano with a left-footed ball through the legs of a Malmö defender. One on one with Wiland, the Portugal captain buried the opportunity expertly and overtook Raúl as the club's leading marksman in European competitions.

There was to be no further change to the scores before the break; however, the visitors would have gone in another goal to the good had a spectacular 42nd-minute effort from Dani Carvajal, struck with the outside of his right boot, not hit bar and post of Wiland's goalmouth.

Defensive solidity
The Whites began the second half as they had the first: offering a display of no little solidity and threatening the Malmö box frequently. They were not far away from extending their advantage in the 51st minute, but Kovacic's half-volley from Álvaro Arbeloa's pass flew just wide.

With Real Madrid in control of possession and moving to take any possible sting out of the game, a Malmö outfit roared on by their home crowd sought to create danger with crosses from out wide. The tactic might have paid off with just over fifteen to go, when Anton Tinnerholm swung the ball in and Markus Rosenberg's header flashed just centimetres wide. After 78 minutes, the hosts then found themselves down to ten men following the sending-off of Yoshimar Yotún for a second yellow card.

History made
The final ten minutes saw two individuals take centre stage: Cristiano and Wiland. The Real Madrid man was twice prevented from sealing the points by exceptional interventions from the Malmö custodian, first from a shot on the half-turn in the 80th minute, then five minutes later when in on goal. But with the clock reaching the 90, Cristiano ensured it was third time lucky. Lucas Vázquez crossed low, and the forward turned the ball into the net with a first-time, left-footed finish. He is now the club's all-time highest scorer, while Real Madrid remain top of their group and unbeaten in all competitions. 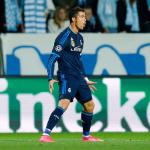