The goalkeeper, who is a member of the Spanish national squad, was at the Whites academy between 2000 and 2007.
Kiko Casilla (Alcover,Tarragona, 02-10-1986) is a new Real Madrid player. The side are strengthening their options in goal with a player who has already played for the Madrid academy between 2000 and 2007 and who has proven himself to be one of the best goalkeepers on the national scene. He has moved from Espanyol, is 28 years old, and is a squad member of the Spanish national team.

An important goalkeeper, with standout aerial play and reflexes that have allowed him to make some spectacular stops. In fact, he is the La Liga goalkeeper with the most saves over the last two seasons (209).

Casilla knows Real Madrid perfectly well, given that he played in the club's academy ranks. In summer 2000, he joined the Under-15s and formed a part of the Castilla side that played in Segunda during the 2005/06 and 2006/07 seasons. In the latter season, he became a part of the first team squad, and was called up on several occasions as the third choice keeper.

In 2007 he went to Espanyol and, although he played for the reserve team he played several La Liga games. After a spell at Cádiz (including promotion) and Cartagena, in 2011 he cemented his place in the Espanyol squad. He has made continuous progress there over the last few years.

In November 2014, after several call-ups, he made his debut for Spain in a friendly against Germany. In February 2015 he made his 100th appearance in the top-flight. Now, having consolidate his place among the elite, he has returned to Real Madrid to strengthen Rafa Benítez' side. 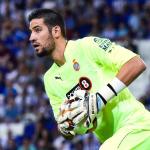