Petrovic was born in Sibenik (Croatia) on 22 October 1964. He excelled on the continental stage while with KK Sibenka and Cibona Zagreb, which earned him a move to Real Madrid in 1988. Among his many memorable moments as a player for the Whites was his Cup Winners Cup performance against Snaidero Caserta, when he scored 62 points. He later went on to play in the NBA, with the Portland Trail Blazers and the New Jersey Nets.

Tributes
The latter of these American sporting franchises retired his number 3 shirt following his death. There is a museum in Zagreb dedicated to preserving Petrovic's memory and a statue of him was also erected outside the Cibona arena. 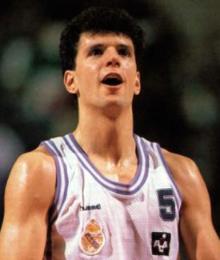