The event, in which members of the Peña Mortera Blanca supporters club participated, took place in Ciudad Real Madrid.
Illarra, Varane, Jesé and Lucas Silva were the stars of the show at a Bwin clinic held in Ciudad Real Madrid. The four took part in an event with 20 fans, with whom they trained and offered footballing advice to. The Real Madrid players practiced free kick taking, carried out drills working on ball skills and played foot-volley.

The four players also took part in a match to round off this unique experience. The 20 fans who attended the clinic belong to the Peña Mortera Blanca (Cantabria), which won a Bwin promotion exclusively for Real Madrid supporters clubs.

Photographs with the players
Before meeting with the footballers, the prize winners visited Ciudad Real Madrid and got to see the installations in which their heroes play and live. Additionally, when the clinic ended they were able to have their photos taken with the four players, and the (wo)man-of-the-match was given a jersey signed by the whole first team squad. Lorena was selected to receive this award.

An unforgettable day
Gabriel Ortega, the Peña Mortera Blanca president, described this extremely special day: “It has been incredible, this is a once in a lifetime experience and has been an unforgettable day. We are all thrilled. It has been great, a superb day and the players have treated us phenomenally and been extremely charming. We can only express our thanks for everything. We won't stop talking or bragging about this experience for a long time”. 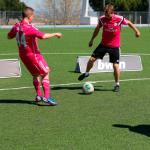