He scored five goals for the first time in his career, with Benzema adding two and Bale another as the Whites sealed victory over the Andalusians.
Santiago Bernabéu

1
Real Madrid offered no let-up in the race for the La Liga title against Granada, picking up the first three of the 30 points they have set as their target until the end of the campaign. And they did so in style, scoring nine times and putting on a match for their home crowd to savour. The Whites had the game wrapped up in the first half with four goals and underlined the words of their coach, who confessed in his pre-match press conference that the team looked "fresh and ready to try to win every game that's left".

It was at the feet of James, making his return to the team after a 60-day absence, that the first two goals came about. Bale took advantage of his assist after 25' to open the scoring, the Welshman moving past Mainz, rounding Oier and finishing into an empty net from close to the goalline. The hardest part was now out of the way, and Cristiano Ronaldo put his side firmly on course five minutes later, receiving from James to fire in a shot that curled beyond the visiting keeper's reach.

That goal signalled the beginning of a magnificent showing from the Portuguese star, who in just eight minutes claimed his 24th hat-trick in La Liga. Marcelo crossed on 36' and Oier's unsuccessul parry fell to Cristiano, who latched on to the rebound to score on the volley. Two minutes later the fourth - the forward's 34th of the current campaign - arrived through a powerful a shot from the edge of the area. He is Pichichi once more.

Unforgettable game for the Portuguese
Real Madrid were enjoying themselves and so were the fans, as the Whites reminded everyone of their credentials against a Granada outfit who only created danger through a nice long-range drive from El Arabi that hit the crossbar on 44'. In the second half, the hosts' stellar display continued as they took a mere 11 minutes to add three further goals to the four scored in the first half. The first came courtesy of Benzema, when James delivered the corner on 52' and the Frenchman demonstrated his class to control the ball on his chest and power past Oier.

Cristiano Ronaldo had already hit three, but his ambition always spurs him on to outdo himself, and he gave another illlustration of that as he notched the team's sixth of the game and his fourth. After 54',  Marcelo provided a measured long pass, Bale controlled fantastically and assisted for the Portuguese to head in. Two minutes later came the seventh, Benzema sealing a brace with a shot from close range.

Nine goals to go down in history
Granada also earned reward in front of goal, with Robert Ibáñez finding the net after 74'. It wasn't the end to the day's scoring, as two more goals were to come. Modric centred on 83' and Mainz's attempt to clear saw him turn the Croat's cross into his net, before Cristiano completed his historic afternoon with the ninth. Modric sent in the free-kick after 89' and the number seven headed in. Real Madrid had served up a reminder of their credentials through goals and great play. It had been 47 years since the Whites had last scored 9 in a La Liga match. 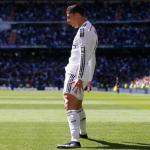