Goals from Bale, Ramos, Kroos, Benzema and Cristiano Ronaldo secured a resounding victory against Rayo and a thirteenth straight win for the Whites.
Santiago Bernabéu

1
Real Madrid could not have asked for a better way to head into the international break. The Whites thrashed Rayo, picked up their thirteenth straight victory and put on an authoritative display as league leaders. It has taken them ten matchdays to claim the La Liga top spot and, in view of the attitude and level of play they have displayed from the previous week of international fixtures until tonight, it looks like knocking them off will be a difficult task for the other teams.

The game got off to a perfect start and Bale's goal was testament to that. The Welshman returned to the starting line-up after recovering from his niggling injury and only needed nine minutes to show his worth. Kroos began the move by robbing possession. The German combined with Cristiano, opened up the wing, received the ball from the Portuguese man and with a left-footed pass set up Bale, who finished the move off from within the penalty area.


Despite going a goal behind, Rayo continued to play as bravely as before and Baptistao could have even equalised in the 31’ with a header that was centimetres away from finding it's way into the net, which was marshalled by Navas tonight. But, what came next was another goal for the home side. Benzema threatened to score two minutes before the second went in. His headed effort from a Kroos corner in the 38’ came off the crossbar. James took the following corner kick in the 40’ and Ramos, with his knee, notched up his 50th goal for Whites without letting the ball hit ground.

Kroos gets his first goal for the club
The Whites were in the driving seat, but just before the half time break the former Real Madrid player Alberto Bueno narrowed the deficit after making the most of a misplaced pass from James. That made the second half, which got off to a similar start as the first, all the more exciting. Indeed, the Whites got another goal early on. This time round rather than taken nine minutes to find the back of the net, it was one later in coming. Cristiano Ronaldo received the ball out wide, cut inside to beat his man and saw Kroos arriving at the edge of the box. The German hit a finely curled shot first time that a fully-stretched Cristian Álvarez could do nothing to prevent from going in. The German's first competitive goal for Real Madrid was a top quality finish.

The Whites were firmly in their stride and four minutes later killed off the game. Pepe robbed possession in the centre of the park, dribbled towards the Rayo box and passed the ball to Cristiano Ronaldo, who set up Benzema. As such, the Frenchman extended his exceptional run of form: he has scored nine goals in his last eight games.

That was not the last goal of the encounter, although Bale could have scored the fifth in the 80’. The Welshman's half volley from outside the box was knocked on to the crossbar by Cristian Álvarez. He was unable to do the same three minutes later. Receiving the ball on the left wing, Cristiano beat his marker, made his way into the penalty area and his subsequent shot slipped through the away keeper's legs. Five goals, five goalscorers and two shots hitting the woodwork. A spectacular display by Real Madrid and the perfect way to head into the international break. 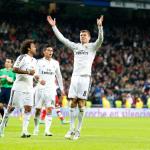